Welcome to the IUPHAR GI section!

Please use the following links to learn more about our section:

During the past 3 decades, the discovery and development of successful GI drugs have revolutionized the treatment of peptic ulcers by remarkably reducing the need for surgical intervention; including the histamine (H2) receptor antagonists and proton pump inhibitors (PPIs). Subsequently, the discovery of association of H. pylori with gastritis and peptic ulcer development has led the use of antibiotic regimens in conjunction with H2 antagonists and PPIs as an even more effective means for peptic ulcer treatment.

The IUPHAR GI Section was established in 1994. During the past 20 years, numerous symposia have been successfully organized to exchange original ideas and preliminary results among the members. Several Nobel laureates have taken part in, including James Black, Barry Marshall, Robin Warren, and Robert J. Lefkowitz.

If you have registered in myIUPHAR under the Members tab then you may join the Gastrointestinal Pharmacology Discussion Group.

The origins of IUPHAR GI Section, its ISCTICO symposia series and the “Andre Robert Awards”

The International Union of Basic and Clinical Pharmacology (IUPHAR) consists of member societies of many countries, one division, eight sections and three standing committees.  Initially called as “Gastrointestinal (GI) Pharmacology Section”, it was established in 1994 at the Montreal congress of IUPHAR. With the help of Dr. Tom Burks, then editor of J. Pharmacol. Exp. Ther. (JPET), the main initiators were Drs. Timothy Gaginella (then editor of GI pharmacology section of JPET) and Sandor Szabo (then associate professor at Harvard Medical School). In 1994 IUPHAR (established in 1959) had only two previous sections, i.e., on Drug Metabolism and Drug Transport as well as on Education.  At the subsequent World Congresses of Pharmacology (WCP) the GI Section usually had one symposium as well as oral and poster sessions, selected form submitted abstracts on various topics of GI pharmacology. This prominent representation of GI pharmacology at international level is mostly due to the activity of previous chairs/presidents of the Section, e.g., Profs. Gyula Mozsik (Hungary), Koji Takeuchi (Japan), C.H. Cho (Hong Kong), Sandor Szabo (USA), Duan Chen (Norway).  These activities culminated at the 17th WCP in Cape Town (2014) when the GI Section had five symposia (accepted from the proposed eight) and at the 18th WCP in Kyoto (2018) three symposia and one “Cutting edge lecture”.

This is the most prominent and longest running conference series of the IUPHAR GI Section. Actually, it’s beginning pre-dates the establishment of the GI Section and it originates from a peaceful but compassionate dispute between prominent scientists: 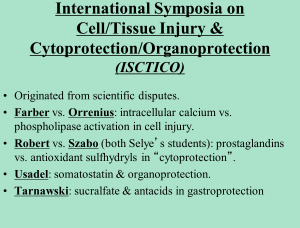 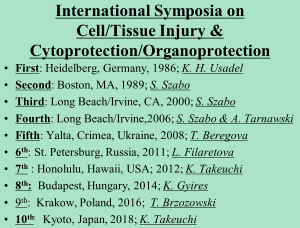 These initiating scientists, i.e., André Robert, Sandor Szabo, John Farber (all from USA), Sten Orrenius (Sweden) and Klaus Henning Usadel (Germany) became members of the Standing Committee of ISCTICO.  After the untimely death of André Robert in 1991, Andy Tarnawski was invited to replace A. Robert.

The first symposium in this series was held at the oldest university in Germany (Heidelberg) in 1986 and the second one at Harvard Medical School in Boston, MA in 1989.  Following a few more ISCTICO meetings in the USA, symposia were held in Ukraine, Russia, Hungary, Poland and Japan.  The abstracts of virtually all these symposia were published in good international journals, mostly in Digestive Diseases and Sciences (Springer).   Initially, the topics of presentations by invited speakers and short oral or poster presenters were related to the prevention of acute gastric mucosal injury, according to the definition of “gastric cytoprotection” (1, 2) by André Robert (i.e., protection against chemically induced acute hemorrhagic gastric erosions in rats by non-antisecretory doses of prostaglandins).  Subsequently, when after numerous time-course microscopic and mechanistic studies became clear that this “cytoprotection” is relative, the term “gastroprotection” has become more popular and accurate designation (3).  Furthermore, the topics of presentations at these symposia covered not only the prevention but also treatment of ulcerative and inflammatory acute and chronic lesions in the upper and lower GI tract. This shift is best illustrated in some of the proceedings (full papers of best presentations) of ISCTICO, the best of which is the book edited by L. Filaretova and K. Takeuchi, based on presentations at the 6th Symposium in St. Petersburg, Russia in 2011 (4).

After the establishment of IUHAR GI Section in 1994, virtually all the ISCTICO conferences were listed as “Special IUPHAR GI Symposia”. As the result of ageing/retirement of some of the Standing Committee members, the leadership has been gradually transferred to the IUHAR GI Section.  Namely at the 17th WCP in Cape Town in 2014 and at the 9th ISCTICO in Poland in 2016, it was officially announced that, I addition to the new members (L. Filaretova, Russia; K. Takeuchi, Japan), the vice-chairs will be the president and vice-president of IUPHAR GI Section, i.e., then Duan Chen (Norway) and Klara Gyires (Hungary), respectively. And at the recent 10th ISCTICO and 18th WCP (both in Kyoto, Japan), it was proposed that the outgoing IUPHAR GI Section president (in this case Duan Chen) will become the chair of the ISCTICO Standing Committee and the current vice-president (Klara Gyires) would serve as vice-chair: 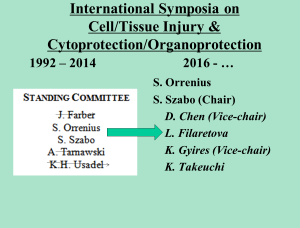 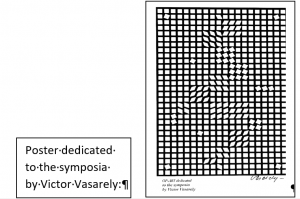 At the IUPHAR GI Section leadership meeting during the 17th WCP in Cape Town (2014) it was Klara Gyires who proposed that a prize should be established in the name Andre Robert and be awarded to internationally known GI investigators who made creative and original contributions in the field of GI pharmacology. The suggestion was accepted and the first plaques, with the picture of Andre Robert, were awarded to Gy. Mozsik (Hungary), K Takeuchi (Japan) and A. Tarnawski (USA) during the 8th ISCTICO in Budapest in 2014, while at the 9th ISCTICO in Krakow in 2016 L. Filaretova (Russia), K. Gyires (Hungary) and S. Szabo (USA) received the prize.  The 2018 awards, given out at the 10th ISCTICO and 18th WCP in Kyoto, went to T. Brzozowski (Poland) and Y. Tache (USA).

In conclusion, the concept of “gastric cytoprotection”/gastroprotection has been widely expanded during the last, almost 40 years to cover pharmacologic prevention and therapy of ulcerative and inflammatory lesions in the upper and lower GI tract. Hence, it’s is still relevant (5) and the ISCTICO conferences are fitting to be managed and organized by the IUPHAR GI Section.