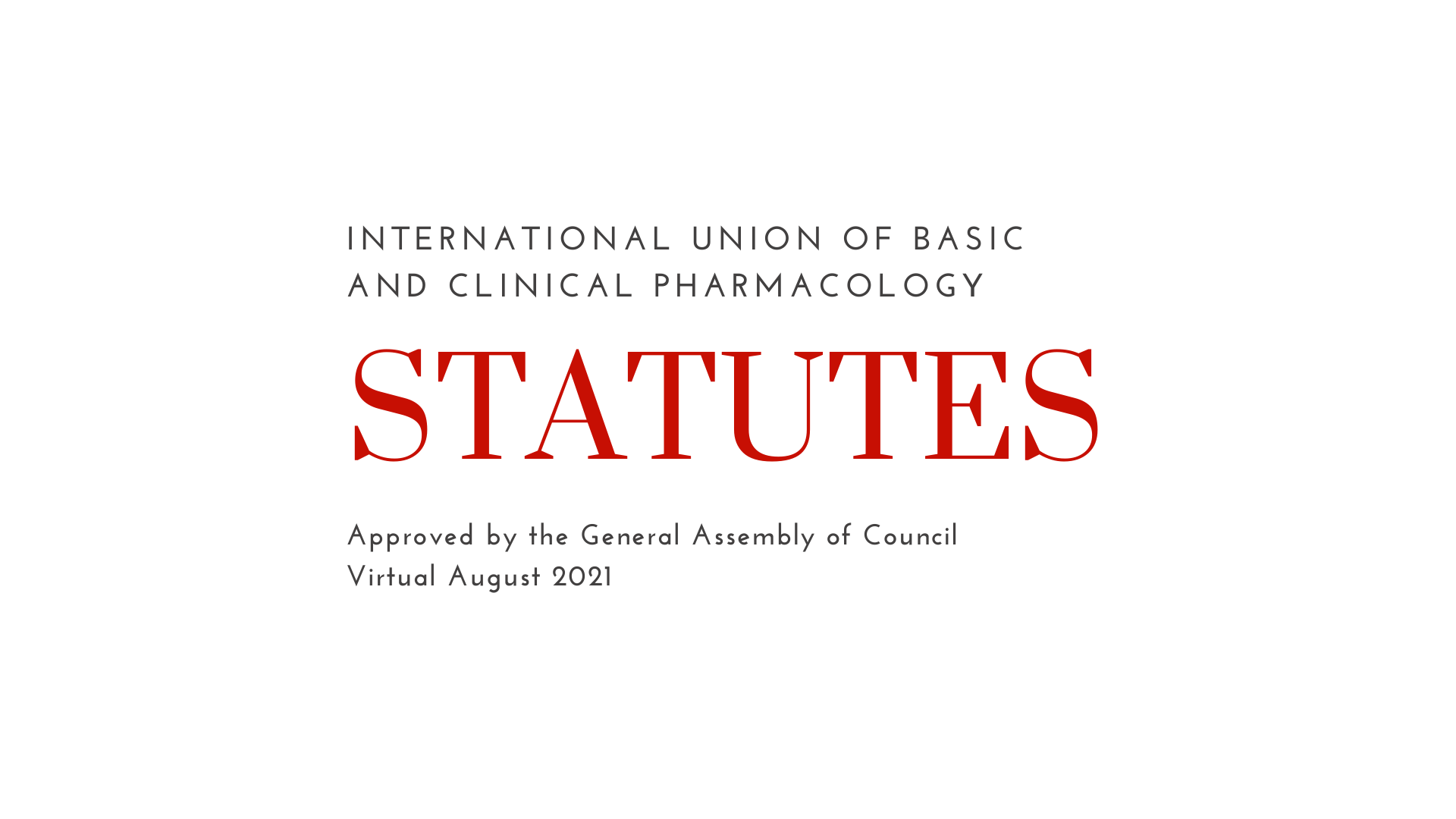 The name of this organization shall be the “International Union of Basic and Clinical Pharmacology”
The official abbreviation of this name shall be “IUPHAR”. IUPHAR is a non-profit Society according to Article 60 ff. of the Swiss Civil Law with its seat in Basel, Switzerland.

2) Aims and Functions of IUPHAR

Object
IUPHAR is a Member of the International Science Council (ICS). The object of IUPHAR is to support pharmacology research and education, and their application to improve global health.

This will be accomplished by:

Fostering basic and clinical pharmacology as a translational discipline by extending its reach into all aspects of healthcare.
Enhancing the status of pharmacology as a leader among the biomedical sciences.
Increasing public awareness of pharmacology.
Expanding IUPHAR databases and guides, serving as an international point of reference and standardisation for drug discovery, drug development and education.
Promoting rational and safe use of therapeutic agents as well as personalized medicine.
Contributing to the development of valuable new therapeutic agents.
Initiating, supervising and promoting the World Congress of Pharmacology.
Encouraging the development of basic and clinical pharmacology in resource limited countries.
Supporting education in all aspects of pharmacology.
Developing the careers of Early Career Pharmacology Researchers.
Serving as a pharmacological reference point with regulatory agencies, WHO and related organizations.
Coordinating and facilitating pharmacological responses in the face of global healthcare emergencies.

Powers
For these purposes, IUPHAR shall have the power to:

Establish and dissolve committees, sub-committees, sections, working groups or any other such group;
nominate representatives for special purposes;
organize and sponsor congresses, conferences, symposia, meetings, workshops or any other such gatherings of people, any of which may take place through electronic means
promote and sponsor publications in pharmacology and related disciplines;
enter into relations with other scientific organizations and,
in general, develop any activity which seems helpful to the promotion of its Object

IUPHAR has the following resources for pursuing its purpose:

A Full Member shall pay annual dues according to a scale based on the number of individuals constituting its Membership. The units of the scale shall be calculated using a methodology determined by the Executive Committee and set out in IUPHAR’s Operating Procedures.

The Executive Committee shall propose the amount and currency of the membership fees for all members as well as appropriate annual subscriptions for Associate Members and Corporate Members for approval by the Council.

Full Members of IUPHAR shall consist primarily of national and regional societies for pharmacology and related disciplines. There may be more than one Full Member from a country or region if they represent areas distinctly separated geographically or scientifically, and with independent budgets for scientific purposes.

Associate Members shall consist of scientific societies, multinational regional associations, charities and other non-profit organizations interested in the advancement of pharmacology.

Corporate Members shall consist of incorporated businesses whose activities are related to pharmacology and who wish to support the scientific activities of IUPHAR.

Membership requests must be submitted to the Executive Committee, which determines whether or not the application is successful.

Termination of Membership
Membership is terminated as a result of the withdrawal, expulsion or dissolution of the Member’s underlying association or organization.

Withdrawal and Expulsion
Members may withdraw from the Society at any point, by submitting written notice to the Secretary General. The full membership dues must be paid for partial years.

A Member can be expelled from the Society by the Executive Committee at any time for breaches of these Statutes or breaches of IUPHAR’s object.

If a Member does not pay its dues for more than one year, it will be expelled automatically unless exempted from dues by provision of Chapter 3.

The Council
The Executive Committee and its Subcommittees
The Auditors (if requested by law)
Groups below the Exec Committee, as set out in Purposes above
Council
The Council is the supreme body of IUPHAR. The Council shall consist of the Full Members of IUPHAR.

Voting Rights and Quorum
The Full Members shall have a number of votes according to a scale based on the number of individuals constituting its Membership. The units of the scale shall be calculated using a methodology determined by the Executive Committee and set out in IUPHAR’s Operating Procedures.

The Full Members may each be represented by a proxy exercising its voting rights using a written proxy voting form as set out in the Operating Procedures.

The President may, a) with the consent of the Executive Committee or b) upon a written request of Full Members representing at least 20% of the voting rights of the Council, stating the purpose of the meeting, summon an Extraordinary General Assembly to be held as a virtual meeting. Notice of at least three weeks must be given to Council. The Extraordinary General Assembly is to take place within 12 weeks of the receipt of such a written request by Full Members.

The notice convening the General Assembly must include the agenda items and the motions of the Executive Committee and the Full Members who have requested that a general meeting be called or an item be placed on the agenda.

Nothing in these Statutes is to be taken to preclude the holding and conducting of a General Assembly by such suitable electronic means as the Executive Committee may decide. Such electronic means must provide for the representatives of Full Members who are not present together at the same place to be able to communicate with all the other participants simultaneously, and to vote during the General Assembly.

Voting on resolutions between General Assemblies (Circular Resolutions)
The Executive Committee may, whenever it deems necessary, or whenever Full Members representing together at least 20% of the voting rights of the Council so require, ask Council to vote by electronic means between General Assemblies. For such a resolution to be validly carried, at least 20% of voting rights must be exercised and the appropriate majority of votes cast in favour of the resolution.

The deadline for submitting votes must be at least one week after the request to vote is made.

Details about the process of circular resolutions shall be set out in the Operating Procedures.

Tasks and duties of Council at the General Assembly

The Executive Committee shall consist of a minimum of ten members and a maximum of fourteen members, including four Officers. These Officers shall be the President, the President-Elect, the Secretary-General and the Treasurer.

The Executive Committee shall determine roles on the Committee as required to manage the business of IUPHAR.

Election to the Executive Committee
The Council elects the members of the Executive Committee every two years by electronic ballot, starting in 2022. Notice of at least three weeks must be given to Council before the period for submitting votes starts. The deadline for submitting votes must be at least one week after the start of the voting period.

Deadlines and processes for electing members of the Executive Committee, from advertising positions to announcing successful candidates, shall be set out in the Operating Procedures.

In order to start this sequential election at the General Assembly 2022, half of the Executive Committee will be appointed for four years (including Treasurer) and half for only two years (including Secretary General). To allow continuity in the transition period, the President and Secretary General holding those positions at the time of the election in 2022 may be re-elected for two further years until 2024.

After two consecutive terms, or three in the case where a member of the Executive Committee is elected to an Officer position, the individual is not eligible to be re-elected to the EC.

A member of the Executive Committee may resign at any time, by doing so in writing to the Secretary General.

The Executive Committee may remove one of its members by a two-thirds vote if such a member misses three consecutive meetings or becomes otherwise incapable of fulfilling their duties such as long-term illness.

Delegation of Business Management
The Executive Committee shall appoint members as representatives to other organizations as required.

Officers shall have authority to sign and execute contracts, agreements, and other legal documents in the name of IUPHAR. Two Officers are required to exercise this power. Nothing in the Operating Procedures shall remove or alter this power.

Decisions shall be made by a majority of votes during a meeting or by email or other electronic means between meetings. In the event of a tie, the President has the casting vote.

Minutes of meetings shall be kept.

An individual or a legal entity shall be appointed as IUPHAR’s Auditors if required by law.
Auditors are appointed for a period of four years. Re-appointment is permitted.

The Auditors’ report shall be submitted to the Council. The Auditors may check or verify IUPHAR’s accounts at any time.

The liability of IUPHAR is limited to IUPHAR’s assets. Personal liability on the part of the Members is excluded.

The Society may be dissolved by a Council vote on a resolution to this effect with a majority of at least two-thirds of the votes present or represented.

If IUPHAR is dissolved, its assets shall be given to another legal entity domiciled in Switzerland for charitable or public benefit purposes in the fields of medicine or science. Distribution of IUPHAR’s assets among its members or members of the Executive Committee is excluded. This provision is irrevocable.

These Statutes were approved by the General Assembly on August 30, 2021 and they entered into force on this date.

The German version of these statutes shall be decisive. The English version is only a convenience translation.